Investor sentiment has been decidedly bearish since the beginning of the year and for good reasons. Slowing economic growth, elevated inflation, global conflict and aggressive monetary policy have created persistent volatility. Broad market indices produced negative returns for the quarter and are down double digits year to date. As you can see from the table below, 2022 has been a difficult year for investors.

Foreign equities performed worse than domestic, partly due to the impact of a tremendously strong US dollar. Since mid-2021, the dollar has appreciated 24% and is at its highest level since 2002. The dollar’s recent strength reflects economic problems overseas, uncertainty about the war in Ukraine and the Fed’s more aggressive tightening compared to other central banks. Longer term, we expect the dollar to eventually peak, weaken gradually, and become a tailwind for investments abroad.

During the quarter bond prices declined 4.8% and the yield curve inverted. The ten-year US Treasury yield increased from 3.02% to 3.83% and the two-year yield increased from 2.96% to 4.28%. The yield changes since January are even more dramatic. Bond and cash-alternative yields are now more attractive than they have been in over a decade.

Historically, fixed income has been the “safe” asset class with positive returns in 42 of the last 46 years and infrequent modest negative returns. Within a multiple asset class portfolio, fixed income allocations are intended to provide a buffer during equity drawdowns. As illustrated in the chart below, 2022 is a record setting poor year for the bond market. The Bloomberg US Aggregate Bond index is down 14.6%, its first ever double digit decline. 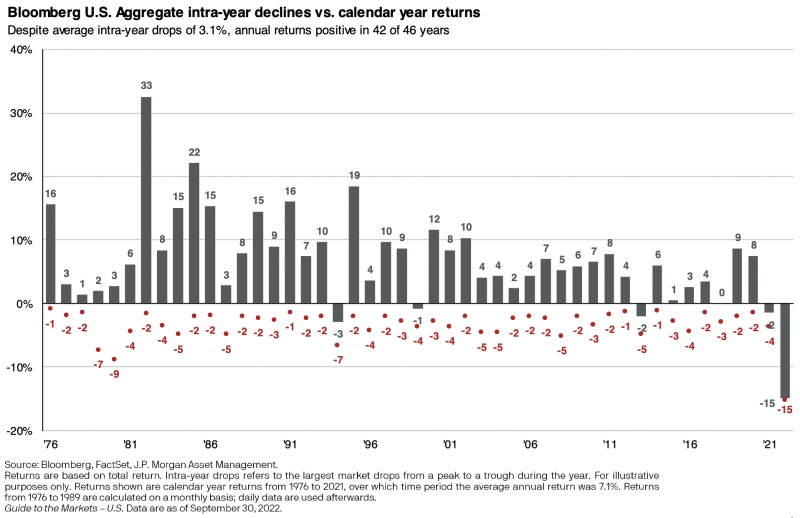 The bond market’s performance is fundamentally attributable to high inflation and the Fed’s aggressive monetary policy. US inflation as measured by CPI likely peaked in June at 9.1%. It declined to 8.2% in September and remains unacceptably high. The inflation outlook is complicated by both domestic and external forces such as the ongoing war in Ukraine, oil market manipulation by the OPEC+ cartel (they’ve committed to cut global production by 2 million barrels per day) and an extremely tight labor market.

Domestically we are experiencing a severe imbalance between the supply and demand of labor. Unemployment is near a 50-year low, job vacancies near historical highs and wage growth is elevated. This imbalance is more severe in industries affected by pandemic era lockdowns such as manufacturing, travel, hospitality, health care and education. With nearly 2 jobs available for every unemployed person in the country and a labor force participation rate still below pre-pandemic averages, labor costs increased 5.1% during the second quarter (third quarter data is not available until the end of October). If wage inflation becomes entrenched and businesses increase prices to cover higher labor costs, it could create an inflationary feedback loop and present an even greater challenge for the Fed’s mandate of price stability. 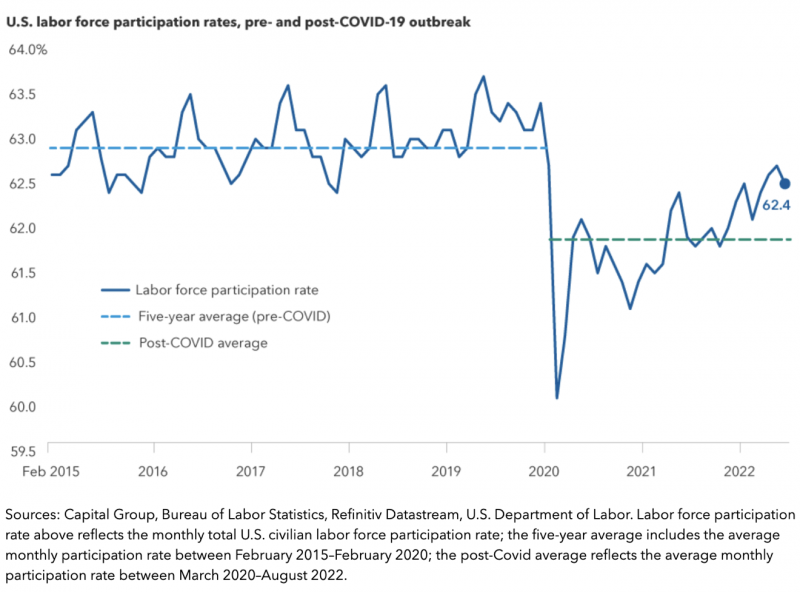 The Fed maintained an overly accommodative monetary policy until the second quarter of this year, despite a strengthening labor market and rising inflation. In March, when the unemployment rate was 3.6% and CPI at 7%, the Fed’s target interest rate remained near zero and it was buying $60 billion of bonds per month to stimulate the economy. Today the Fed is playing catch up and significantly tightening monetary policy. It is reducing its balance sheet at a pace of $95 billion per month, has increased the upper range for the federal funds rate to 3.25% and is projecting further increases to 4.5% next year.

As noted in the chart below, the pace of interest rate increases this cycle is the most rapid in modern times. 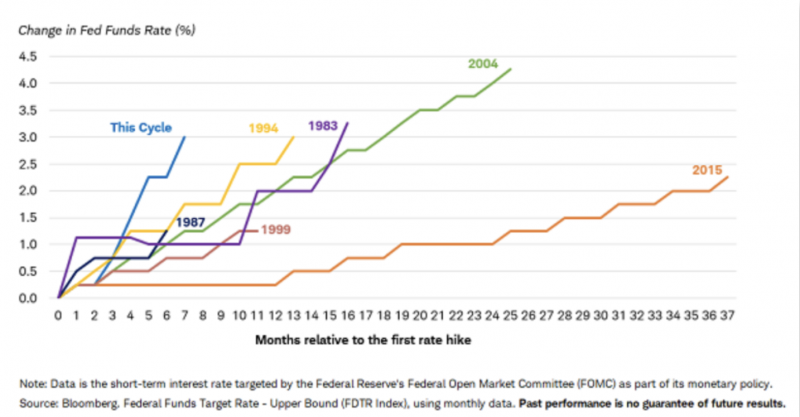 Our economy is complex, and monetary policy changes generally have a long and variable lag effect. For example, mortgage rates adjust quickly to changes in monetary policy – 30 year fixed rate mortgages increased from 3% to 7% this year – the downstream lag effects begin with reduced consumer home purchasing power, then lower demand for new homes and eventually lower prices for new and existing homes. Fewer housing starts this year will reduce employment in home construction next year. There is a similar lag effect in other economic activity caused by the timing of price changes, consumer spending, and acceleration or deferral of capital expenditures. Monetary policy changes have a cascading impact on the broader economy.

As the Fed shifted from an accommodative to a tighter monetary policy, the US equity market slumped into a bear market, then recovered much of its losses by mid-August before declining to a new market low at quarter end. Valuations reflect market sentiment and are slightly below long term averages. Once the concerns about inflation, the Fed and recession risks recede, market volatility should moderate and a new bull market will likely begin. 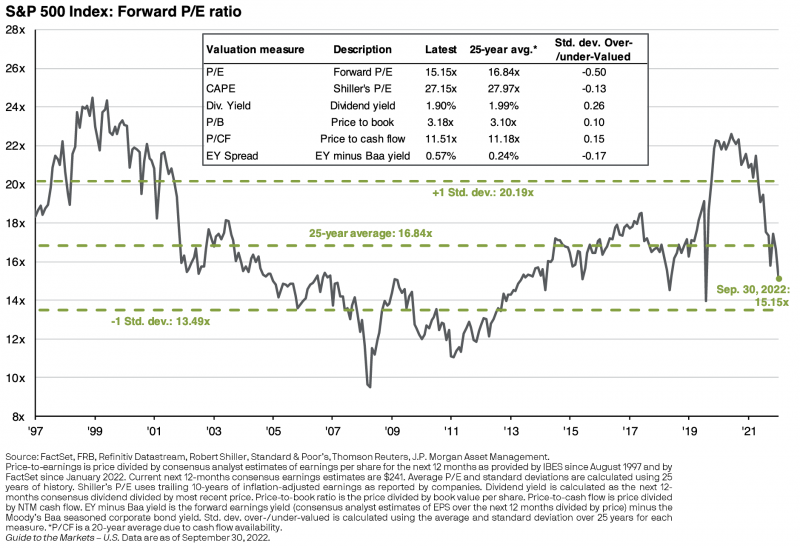 International equity valuations remain cheaper than domestic and their own historical averages. Dividend yields abroad are also nearly 2% higher. The current geopolitical challenges impacting these regions are well known and valuations reflect these uncertainties. Further, a ceasefire in Ukraine, improvements in Chinese growth or moderating inflation would result in a simultaneous rebound in both international currencies and equities. Conversely, if the war drags on, the Chinese economy contracts or inflation remains stubbornly high, we could see a further strengthening of the dollar and valuations could decline more. Time is the long term investor’s ally however, as history has shown even the most challenging circumstances (wars, pandemics, recessions, etc..) eventually end. 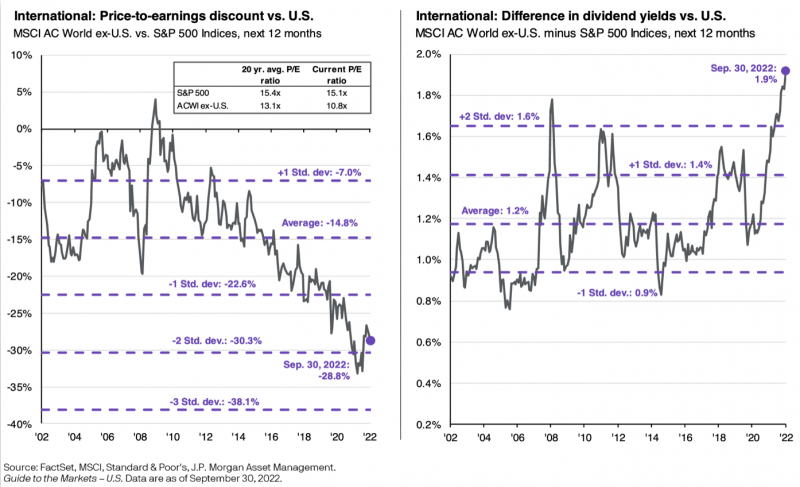 We are focused on fundamentals and valuations, rather than market sentiment, and are optimistic about long term investment returns. Today’s lower equity valuations imply better forward returns and fixed income is more attractive due to higher bond yields. In addition, we expect fixed income will once again become a “safe” asset class and serve as a buffer for equity market volatility.

Over the near term volatility may remain high. For investors with short and intermediate term liquidity needs, we have financial plans and strategies for meeting them without taking meaningful market risks.

Each market cycle is unique and we do not know when the current bear market will transition into the next bull market. What we do know is market timing does not work. It is far more constructive to focus on financial plans, valuations and maintaining objectivity when markets are volatile.

We are grateful for your trust and confidence. Please let us know if you have questions, would like to discuss your financial plan or review your investment portfolio.