Without a doubt, this has been a difficult and extraordinary year for the economy and investors. To recap, the pandemic triggered the worst global recession in over 80 years. Gross Domestic Product (GDP) declined 32% in the second quarter as much of our economy went into a self-imposed lockdown. The U.S. lost 22 million jobs and 11 million people are still collecting unemployment benefits. Massive fiscal and monetary stimulus, much of it designed to replace lost income, helped soften the impact. Negotiations continue for an additional $2-3 trillion of fiscal stimulus but seems increasingly unlikely before the election due to partisanship politics. Even with additional stimulus, the economy will likely be weak until we have a vaccine and the virus controlled.

Election years are often fraught with uncertainty as developments surrounding the candidates, their policy platforms, and the anticipated effects on the economy dominate the news. With the 2020 elections occurring at a time of extreme partisanship and in the midst of a global health and economic crisis, it is not surprising there are concerns about the outcome and how it will impact investors.

Elections matter for many reasons, but their impact on market returns has been negligible most of the time, but not always, and are usually not a good reason to change investment strategy. With the election a few weeks away, we are bracing for a near continuous bombardment of alarmist campaign ads, with the primary purpose of attacking the opposition candidate and stoking fear and uncertainty about the consequences of their opponent winning the election.

Our advice is do not get distracted by the rhetoric or let politics influence your financial plan. When President Obama was elected, many Republicans assumed the stock market would go down just as many Democrats assumed the stock market would fall under President Trump. Both were wrong, and those who allowed politics to overrule their investment strategy lost money in the process.

Much of the pandemic financial aid in the U.S. expired during the third quarter and is reflected in the recent economic statistics. In August, unemployment and other government benefits (excluding Social Security and Medicare) fell by $744 billion. Wage and salary income has recovered considerably since the 10.7% decline from February to April, but it is still down 3.9% from February levels, with most of this impact borne by lower income people who work in the service sectors. All of the high touch service and entertainment businesses, including travel, leisure, hospitality, restaurants, sporting events, and concerts are either shut down or operating at a fraction of their capacity. The economic recovery depends on continued fiscal support until the pandemic is under control and service sector employment returns to normal. Without this support, the recovery will be a lot weaker and the recession a lot longer.

Economic data is typically a lagging indicator (looks backwards), while the stock market is a leading indicator (looks forwards). Market performance and the economy rarely perform in lockstep. Generally, financial markets react unfavorably to bad news and uncertainty, and favorably to good news and consistency, but not always. There are times when markets respond favorably to bad news, if worse was expected. Likewise there are times when markets respond unfavorably to good news, if better was expected. It is often a mistake to form conclusions or make investment decisions based solely on headline news, as the context of future expectations is far more important.

U.S. stocks continued their historic recovery during the third quarter that few predicted back in the depths of the market decline in March. The S&P 500 returned +8.9% during the quarter and +31.3% since the end of March, the best two-quarter performance since 2009. Year to date, the S&P 500 returned +5.6%, in spite of all of the bad news, uncertainty and significant weakness in our economy. As noted on the following chart, domestic stock prices are relatively high based on the forward price earnings (PE) multiple of 21.54x. 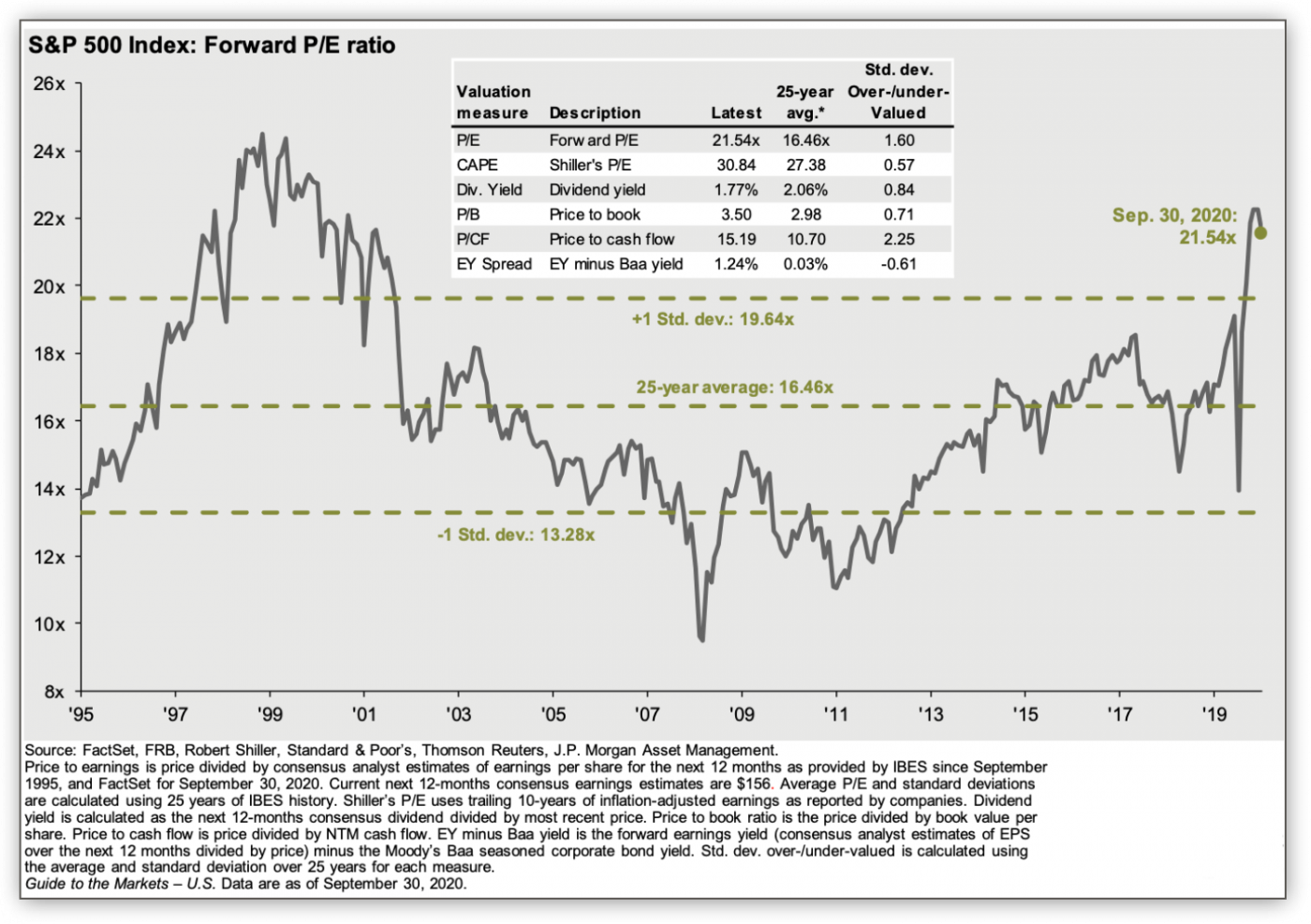 Prices are near record highs while estimated earnings during the coming year are down due to the unusually steep recession. These above average valuations imply near term progress on the medical front, a resumption of economic growth and rising corporate earnings, but the timing is uncertain. It is impossible to accurately predict how a pandemic recession works its way through the economy, and in light of these dependencies and current valuations, it is sensible to have modest expectations for future returns.

Emerging markets and developed international equities returned +9.6% and +6.3%, respectively, in the third quarter, and -1.2% and -5.4%, respectively, year to date. As noted in the following charts, foreign stocks are selling at some of the cheapest levels relative to U.S. stocks in the last 20 years. These valuations further enhance the case for a meaningful allocation to both emerging and developed international equity markets. 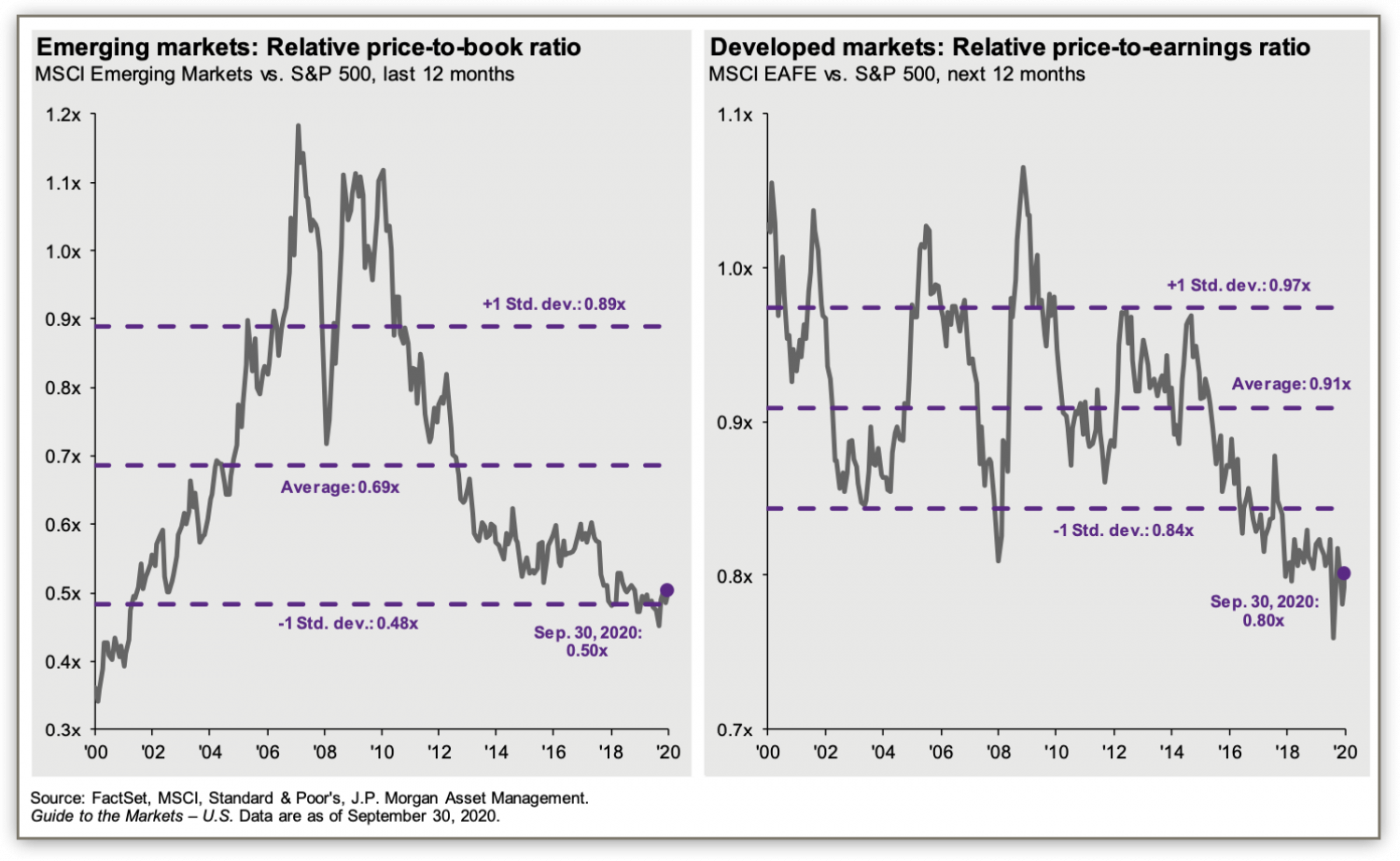 Globally, the fiscal stimulus response is without precedent as governments are taking extreme and necessary measures to mitigate a financial and economic collapse. Year to date, the fiscal response is $12 trillion. In addition, central banks have cut interest rates and provided $7.5 trillion of monetary stimulus in the form of purchases of government and corporate securities, contributing to rising prices of stocks, bonds and other financial assets. The following chart provides some perspective on the fiscal response to the virus, which is shown relative to each country’s GDP. 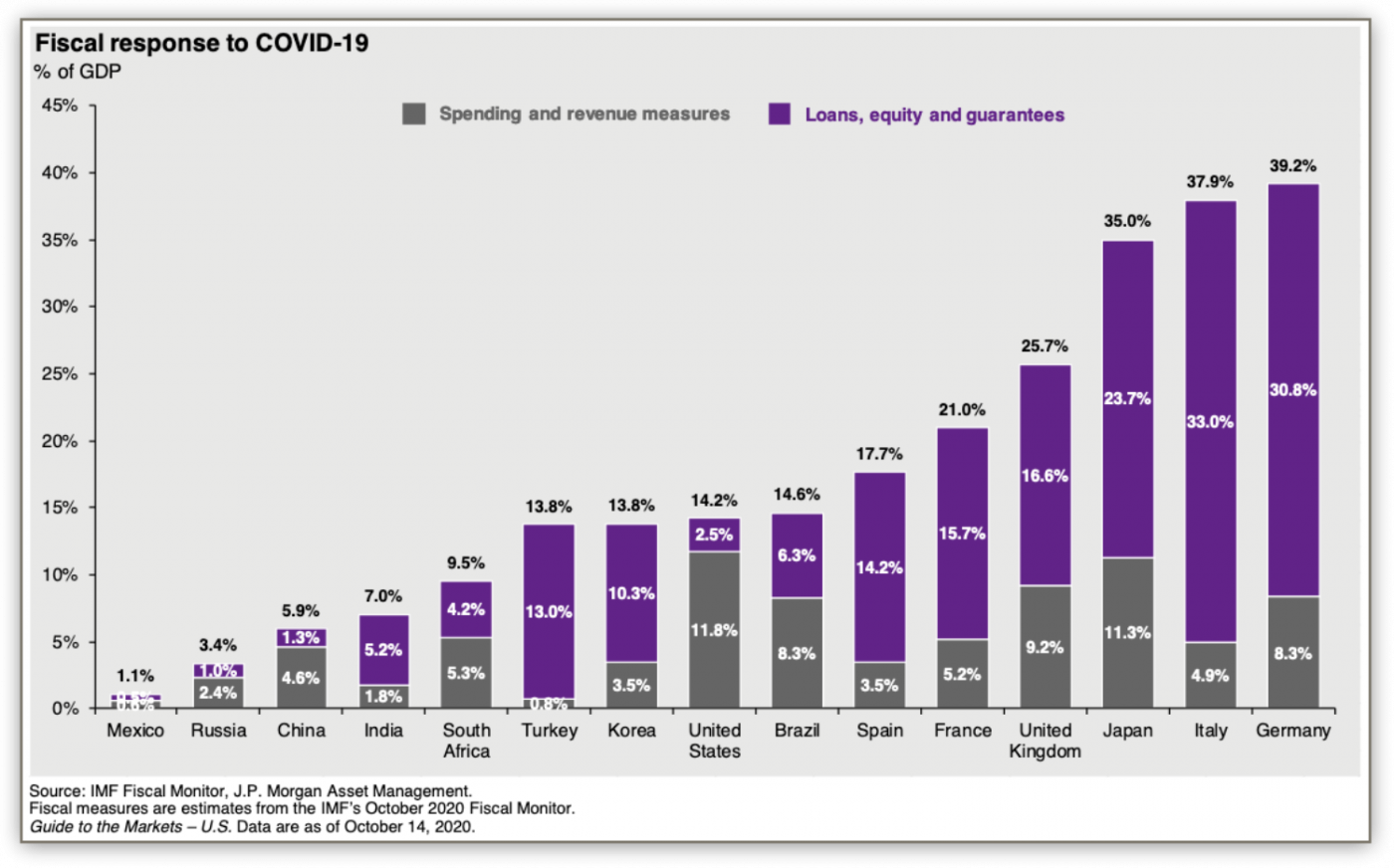 The fiscal stimulus will drive up global deficits by 9% of GDP, according to the forecast by the International Monetary Fund (IMF). The IMF expects global debt to stabilize next year around 100% of GDP, provided the global economy rebounds, the pandemic subsides, and interest rates remain low. As we have mentioned before, the longer-term effects of these actions are unknown, and only time will tell if there will be any unintended adverse consequences.

In fixed income markets, spreads and yields declined due to multiple Federal Reserve Bank liquidity programs designed to keep interest rates low and support the economy. The Bloomberg Barclays Municipal 1-10 year blended benchmark return was +1.07% and +3.22%, respectively, for the quarter and year to date.

The 10-year treasury yield ended the quarter at 0.69%. The current low yields on all bonds reduces the probability of additional capital appreciation without a broad shift to negative interest rates, which we think is unlikely. In spite of low expected returns, fixed income will continue to provide diversification and some protection in the event of an equity market correction or economic relapse.

It is understandable to have concerns about the election and how it might impact the markets. However, the historical evidence suggests the stock market does not have a political bias, and regardless of this year’s election outcome, American capitalism will march forward. Our advice is simple: vote early for the candidates of your choice, disregard the political rhetoric, and stick with your financial plan.