Although it seems like an eternity, it was just a little over six months ago when we first became aware of the novel coronavirus. Since then, there have been over ten million confirmed cases and more than a half million deaths from Covid-19 globally.

In the U.S., there are three million confirmed cases and 130,000 deaths. The chart below shows the increasing number of daily tests administered and the steady climb in positive results following the easing of restrictions and social distancing practices last month. Further, according to The Centers for Disease Control and Prevention, the number of confirmed cases vastly understates the actual figure. The available data may account for an estimated one in ten infections in our country as silent infections lurk in carriers with no discernible symptoms. Infections are rising in 40 of the 50 states, with large increases in several of the most populous, including California, Texas, Florida and Arizona. We are far from seeing the end of the pandemic. 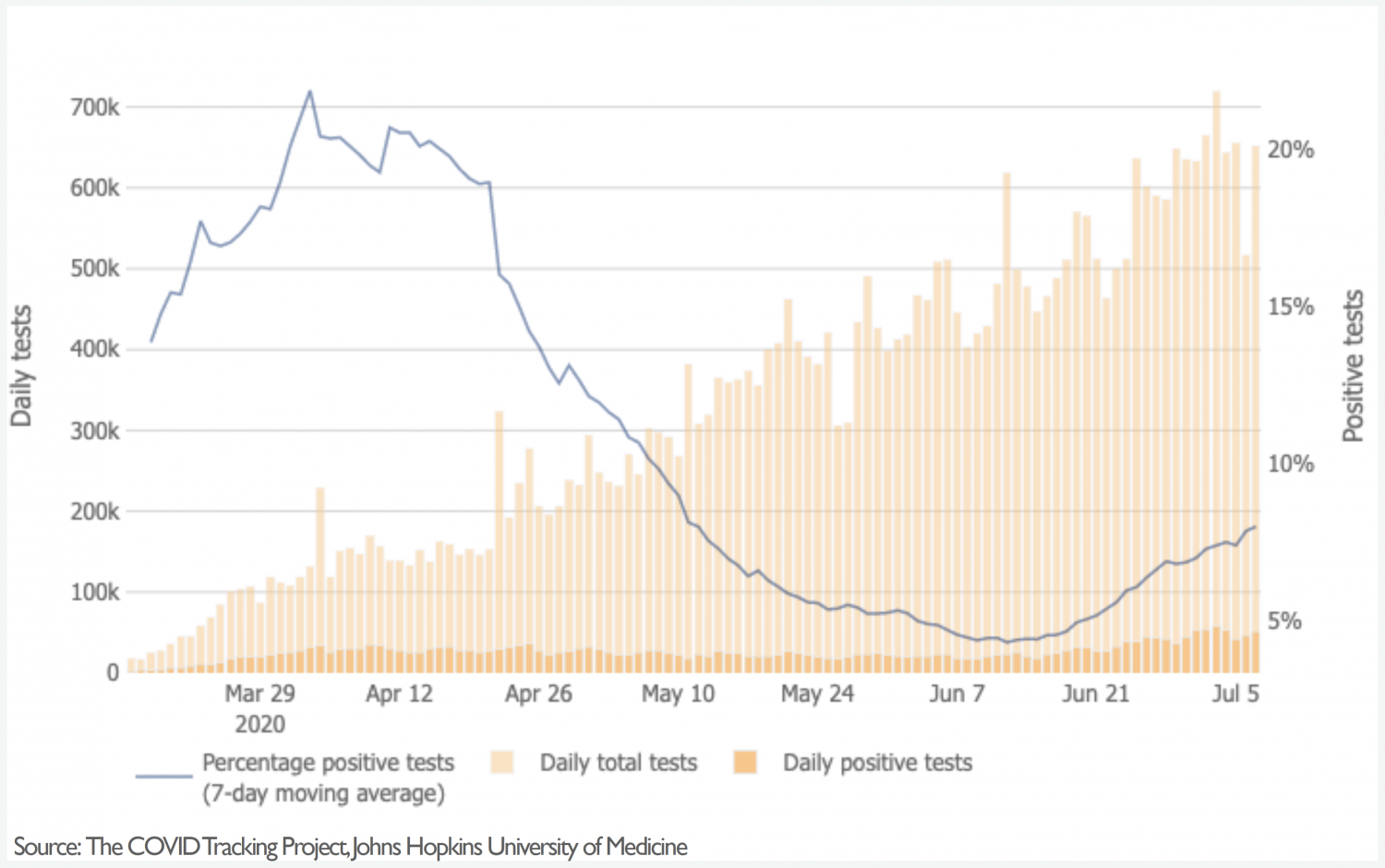 The conflicting rhetoric regarding the virus will continue to build as we consider how to reopen schools, play and watch team sports, and debate the benefits of wearing masks in public. The reality is even as the country reopens, accommodations will need to be made to keep everyone safe. This will cost businesses money and impede economic growth.

Nobody knows how long the pandemic will last or whom will become infected, but the effects on the economy are likely to last for several years. Our success in containing the virus depends on the degree we conform with health conscientious behavior. In the meantime, scientists around the world are pushing aggressively to find a vaccine or effective treatment.

The pandemic triggered the worst global recession in over 80 years with extreme declines in U.S. Industrial production (-15%), consumer spending (-12%) and employment (-10%). The following chart of personal consumption expenditures from the Federal Reserver Bank of St. Louis and the U.S. Bureau of Economic Analysis provides a vivid illustration of the magnitude of this recession. Many other economic indicators have a similar chart pattern, but for the sake of brevity, we are including just one.

Although the economy has improved during the last few months, the outlook is highly uncertain due to the resurgence in infections and unknown timing for effective treatments and vaccines. This recession is the sharpest in history and hopefully will be one of the shortest. However, once Covid-19 is behind us, its psychological impact may cause lingering economic effects.

It took four years to recover job losses following the recession of the early 2000s and six years following the recession in 2008-09. The harsh reality is it may take several years or more to recover the 20 million jobs lost during the last few months and for consumer spending and industrial production to return to pre-pandemic levels. However, as noted in the following chart, recessions have tended to be short with powerful subsequent expansions. 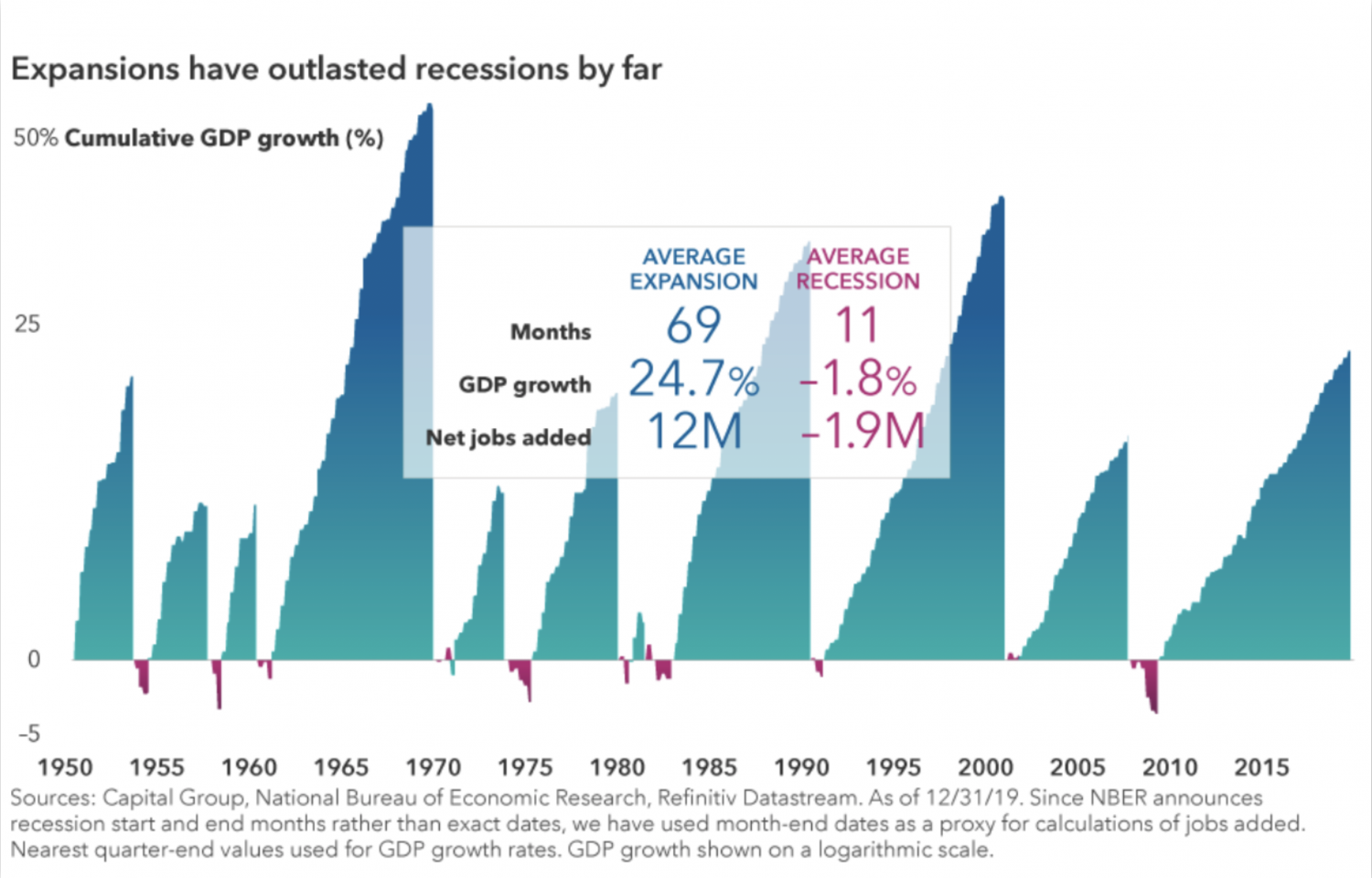 While the world was struggling with the greatest pandemic in a century, the stock market was racing higher driven by optimism about the effects of fiscal and monetary policy, vaccine development, and FOMO (fear of missing out). From its low on March 23, the S&P 500 rallied nearly 45% before peaking on June 8. The market rose on 33 of the 53 trading days during this period, including by more than 1% each on the first nine days. For the quarter, the S&P 500 was up 20%.

As noted in the following chart, the historical price earnings (P/E) ratio of the S&P 500 is almost two standard deviations above its historical average due to sharp reductions in earnings estimates caused by the pandemic. However, using pre-pandemic earnings or normalized earnings post-pandemic, the S&P 500 valuation is much closer to its historical average. The current market valuation is forward looking, implies the impact of the pandemic is temporary, and reflects a “normal” pre-pandemic future state of the economy. With time, we will see a reconciliation between the state of the economy and market valuations.
We expect corporate earnings will recover gradually and may not reach historical levels until 2022. In the meantime, the market may be volatile absent new catalysts to support valuations. Long term, corporate earnings will be the driver of stock market performance. 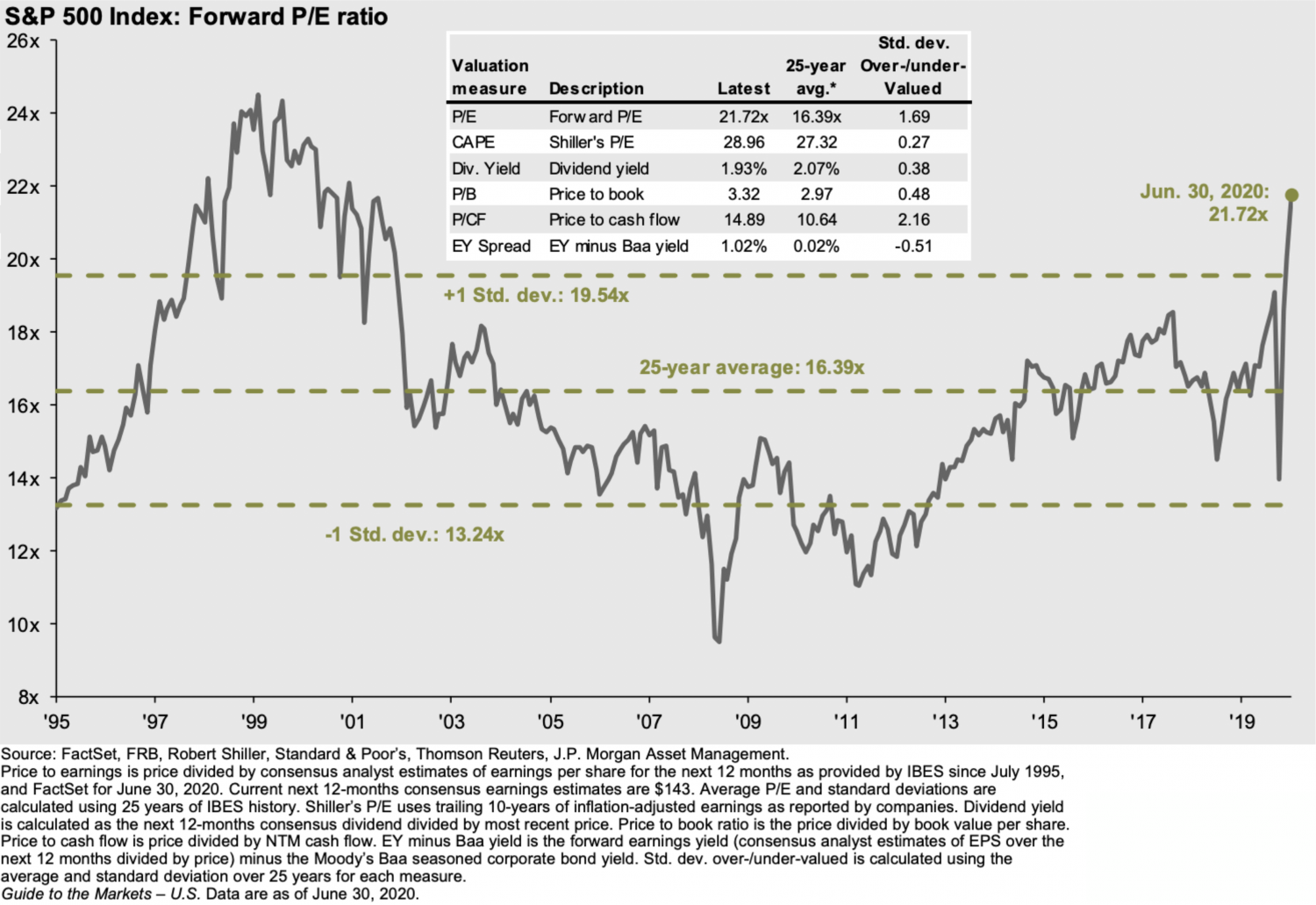 Foreign equities followed a similar pattern as domestic, but valuations continue to be much cheaper as noted in the next chart. In addition, Europe and Asia have arguably done a better job containing the virus and their economies may recover more quickly than ours. As a result, we expect a convergence in valuations between foreign and domestic equities, with better returns from foreign equities during the next market cycle. 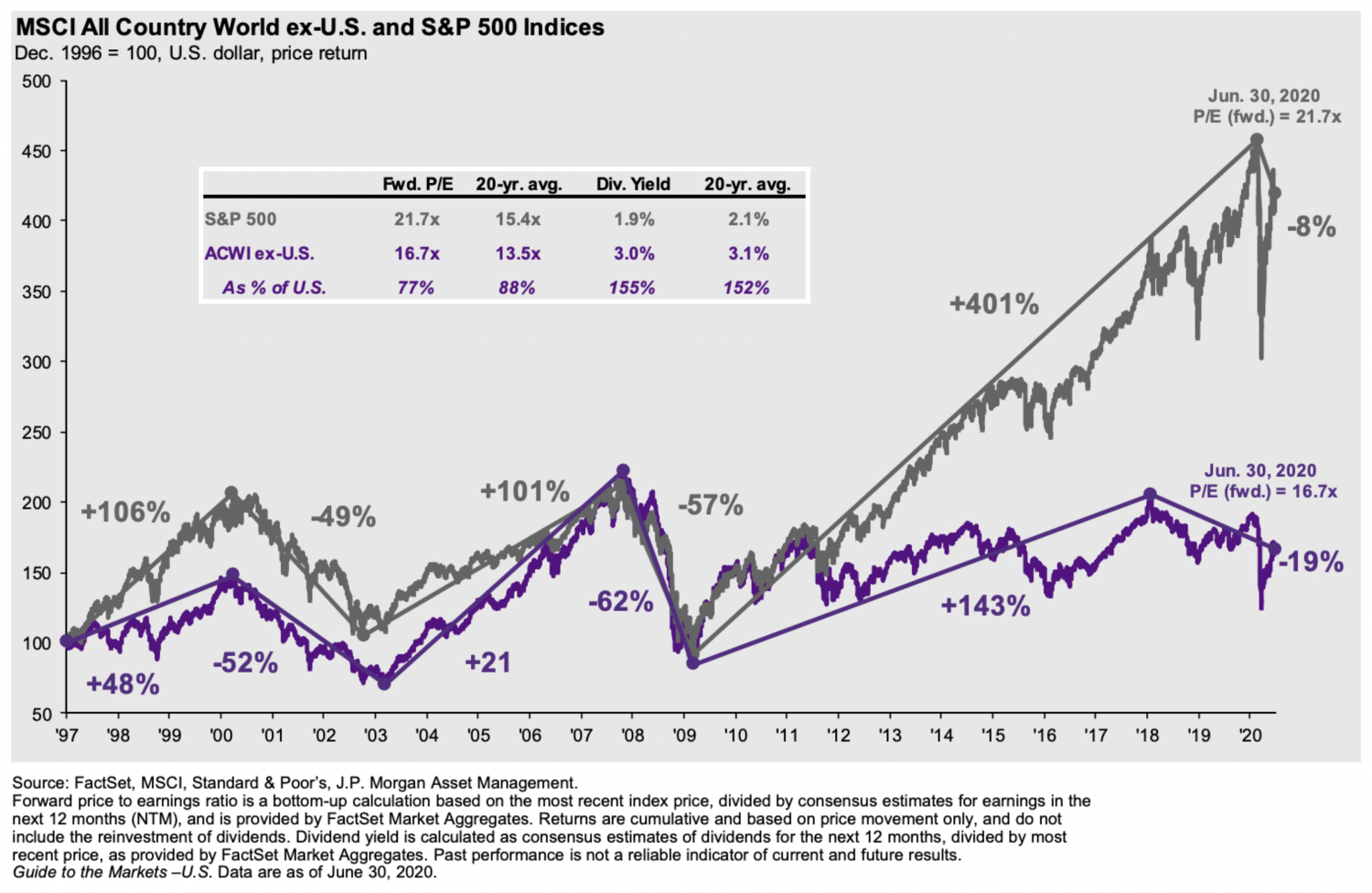 Following the recent unprecedented actions by the Federal Reserve Bank to reduce interest rates and prop up the economy, all interest rates declined significantly with the two and ten year treasury yields ending the quarter at incredibly low yields of 0.13% and 0.66%, respectively. Further, Fed Chairman Jerome Powell stated, “We are not even thinking about thinking about raising interest rates”. Consequently, we expect re-investment yields on maturing bonds to remain low for the next few years.

Historically, we have included a fixed income allocation in our diversified portfolios for three reasons: 1) income generation; 2) capital preservation; and 3) portfolio stabilization. Based on current valuations and yields, traditional fixed income securities do not provide a meaningful level of income. The probability of interest rates declining further providing for capital appreciation is very low, and rising interest rates or inflation will likely reduce the market value of these securities.

Finally, during these uncertain times, there are many important investing principles to guide us through challenging markets and toward your financial goals. There are three that seem both timely and worth repeating.

First, market volatility is normal and it is important to be mentally prepared for it. Stocks have historically provided better returns than other asset categories, but investors must endure short term and often painful volatility in order to realize long term gains. As noted in the following chart, the S&P 500 has declined by double digits during 22 of the last 40 years, yet still ended those years with positive returns 75% of the time. As noted in the far right column, the intra-year decline this year is 34% and the year to date return is -4%. 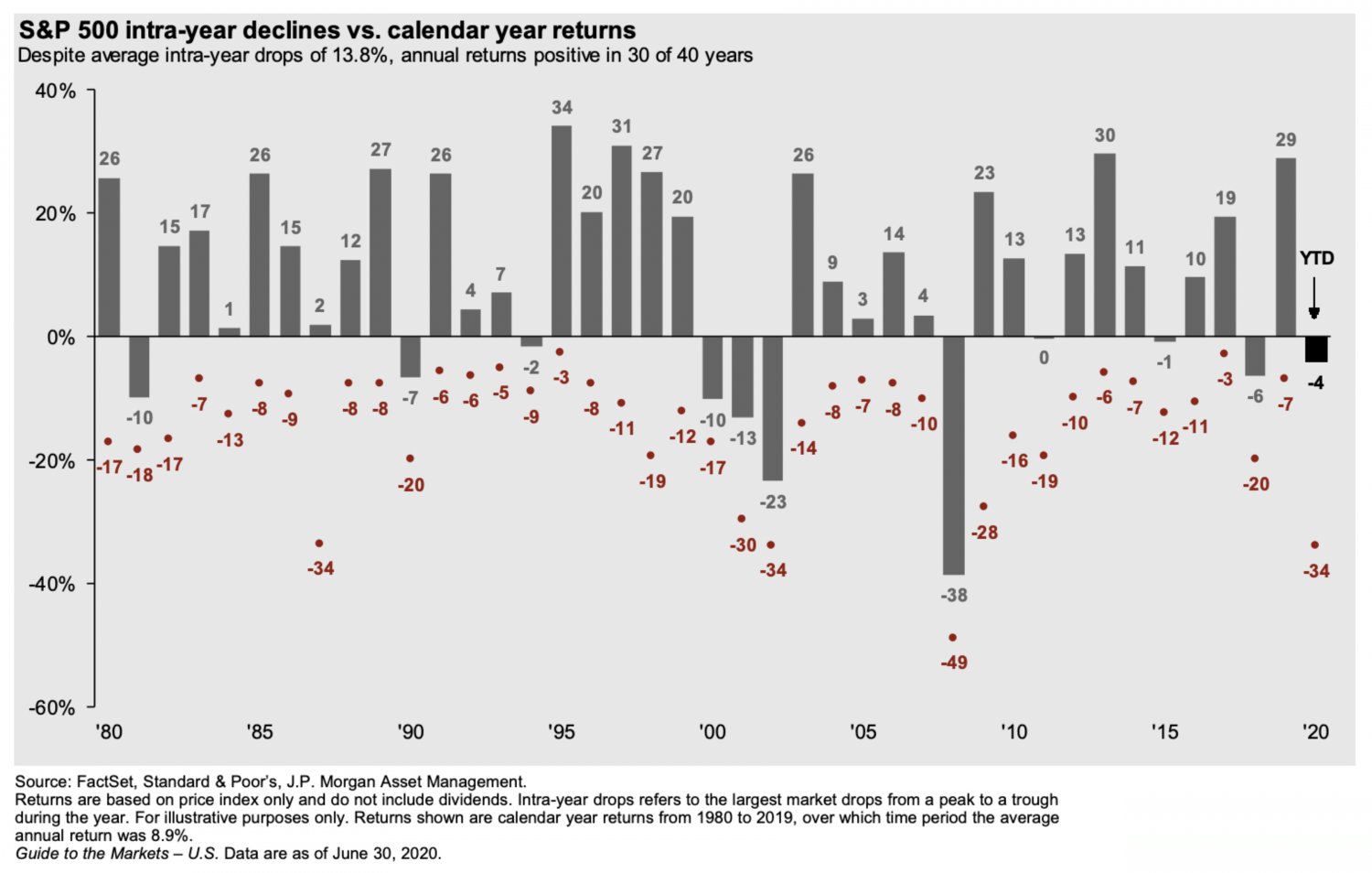 Second, it is critical to avoid emotional biases and stick with your financial plan in good times and bad. There is very little difference between not having a financial plan and not sticking with your financial plan. Investors suffer a heavy cost when their feelings become the basis for decision making. The fear of loss can lead to withdrawing capital from the markets (a.k.a. panic selling) at the worst possible time, and becomes a strong impediment to reentry into the markets. There is profound evidence that “take no action” is a much better investment strategy than withdrawing from the market or other forms of market timing.

As noted in the chart below, missing just the ten best days compared with remaining fully invested in the S&P 500 during the twenty year period ending December 31, 2019 reduced the annual return from 6.06% to 2.18%, a reduction of 64%.

As the saying goes, it is all about time in the markets, not market timing. 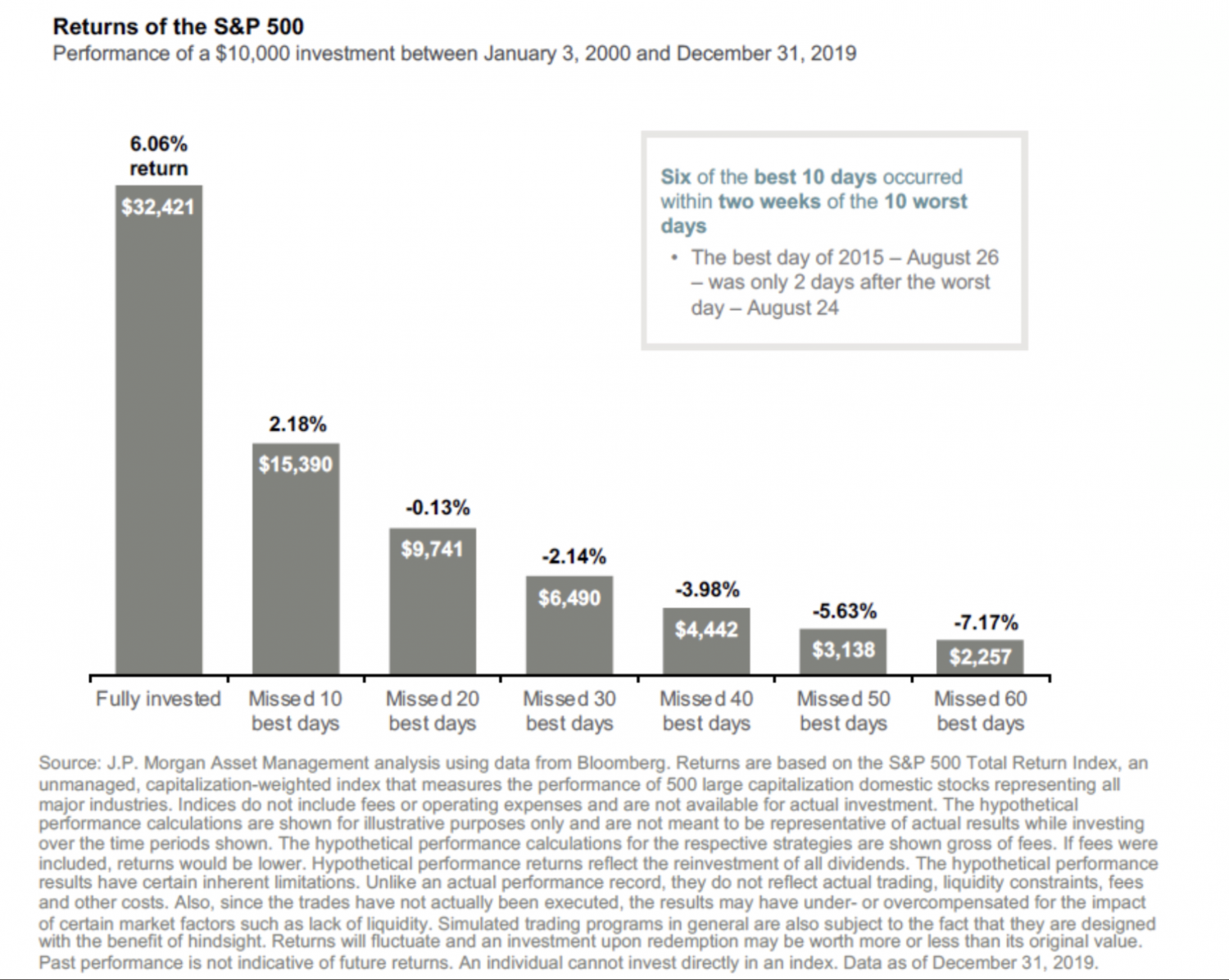 Third, we believe strongly in the merits of a diversified investment portfolio. In any given year, there are usually some sectors or asset categories outperforming and others underperforming. Often asset categories that outperform in a single year lag the following and vice versa. Diversification provides opportunities for uncorrelated returns by investing in multiple asset categories and is a useful and consistent method to managing risk and market volatility.

Asset allocation strategies are really about managing risk tradeoffs and asset correlations in pursuit of return objectives. Portfolio diversification is important regardless of your investment time horizon or financial goals, and perhaps even more so when markets are volatile and highly uncertain.

Be safe and stay healthy, we will get through this.