2019 was a spectacular year for investors, with every major asset class posting strong returns, despite many economic and geopolitical concerns throughout the year.

At the beginning of the year, the federal government was partially shutdown, global manufacturing was declining and the trade war with China was becoming a meaningful economic headwind. Economic growth was decelerating, with third quarter real GDP of +2.1%, down from +3.1% the previous year. The fading impact of tax reform and trade uncertainties were contributing to the slowdown. It was unclear if the economy was headed towards a mid- cycle slump or something more significant.

There were also some positive factors, but the political noise and market volatility were top of mind for investors. As we noted in our market commentary a year ago,

“The economy is strong and we expect it to continue growing, but at a much slower rate in 2019, with gradual declines in consumer spending and business investment. The Index of Leading Indicators is mostly pointing to continued strength during the first half of the year, but the data had started to change, most notably with weakness in housing and a flattening yield curve.”

The equity markets responded enthusiastically to the change in monetary policy, ignoring all signs of decelerating economic growth, geopolitical tensions, trade disputes and the impeachment of the president. For the calendar year, the S&P 500 total return was +31.5%. Foreign equity markets were also very strong, with the developed international and emerging markets equity index returns +22% and +18.4%, respectively. 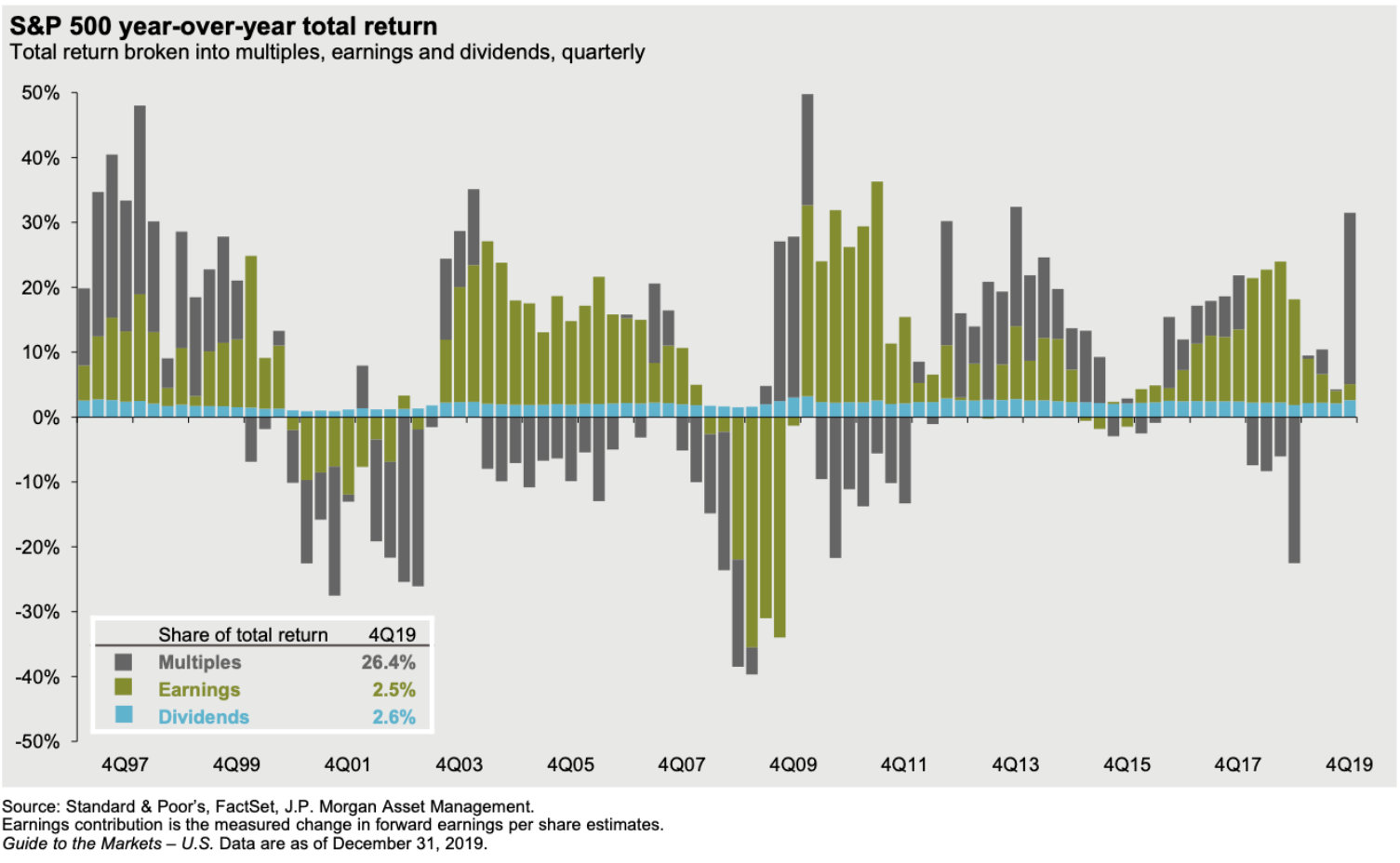 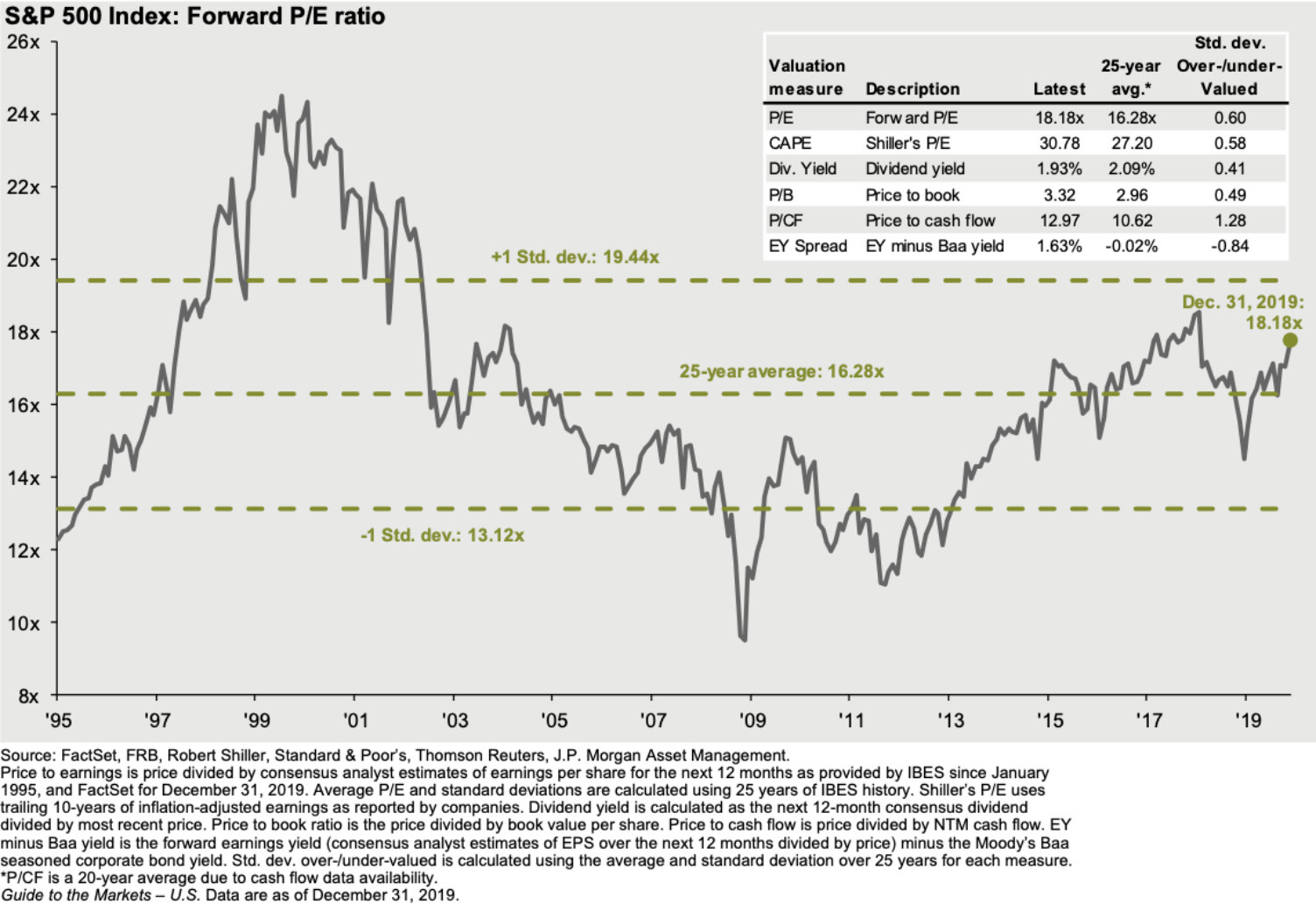 Price earnings multiples are correlated with confidence and sentiment, and as noted on the previous chart, can go far above or below the long term average. Sentiment is currently strong, and may rise further before reverting to the mean. Markets have priced in expectations that interest rates and inflation will remain low, trade tensions will be resolved without meaningful consequences, and current tax and regulatory policies continue for the foreseeable future. If anything to the contrary occurs, there will likely be spillover effects in business and investor confidence, pressuring earnings and equity market valuations.

In the meantime, we expect heightened volatility as geopolitical tensions rise and fall and the election cycle plays out, especially if the polls indicate the democratic party may win the presidential election and control of both branches of Congress.

The MSCI All Country World ex-U.S. index measures the equity market performance of all developed and emerging markets, excluding the U.S. As noted in the chart below, foreign stock valuations are much lower than domestic. The S&P 500 price earnings multiple is above its long term average, while the price earnings multiple of foreign equities is very close to its long term average. Domestic equity price returns during the last ten years were cumulatively 254% higher than foreign equities. 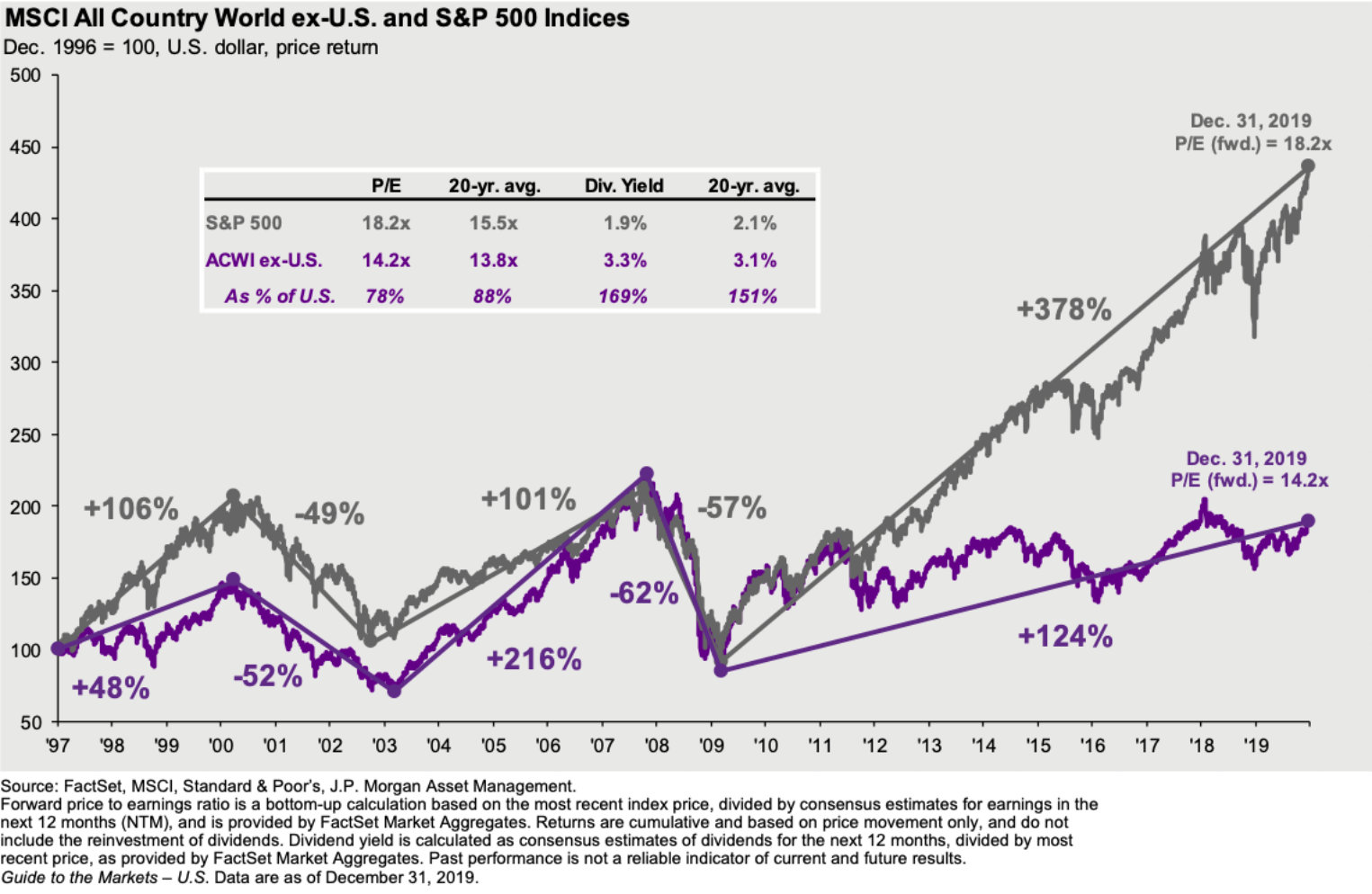 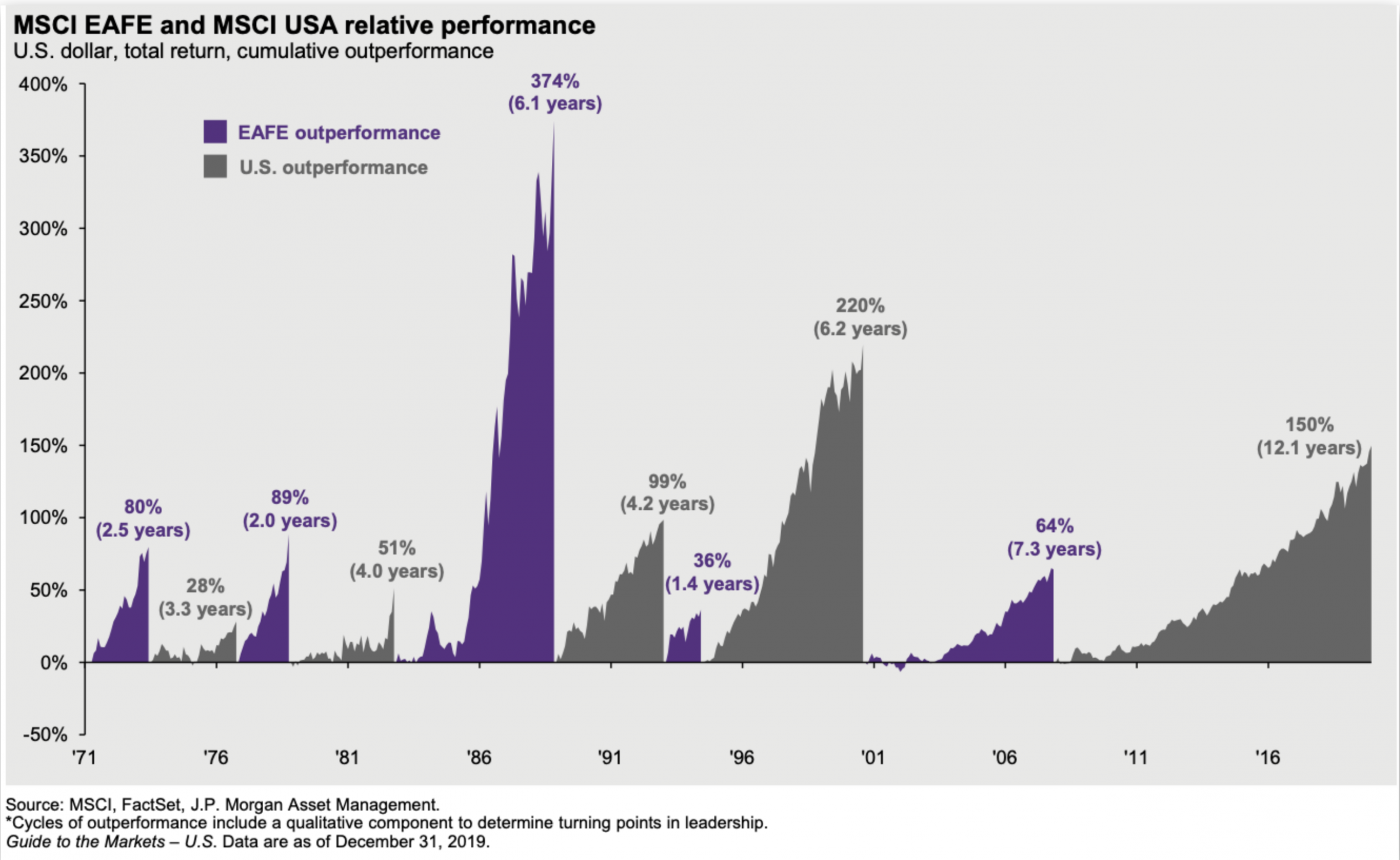 We expect the pattern of cycles of outperformance to continue, but do not know when the turning point will occur. Given the gap in relative valuations, we expect it will occur sooner rather than later.
Interest rates declined throughout the year, continuing the long term trend since peaking in 1981. At the beginning of the year the benchmark ten year treasury yield was 2.75%. It declined to1.47% in September before ending the year at 1.92%. With 2.3% inflation, the real yield (net of inflation) was -0.40% at year end. 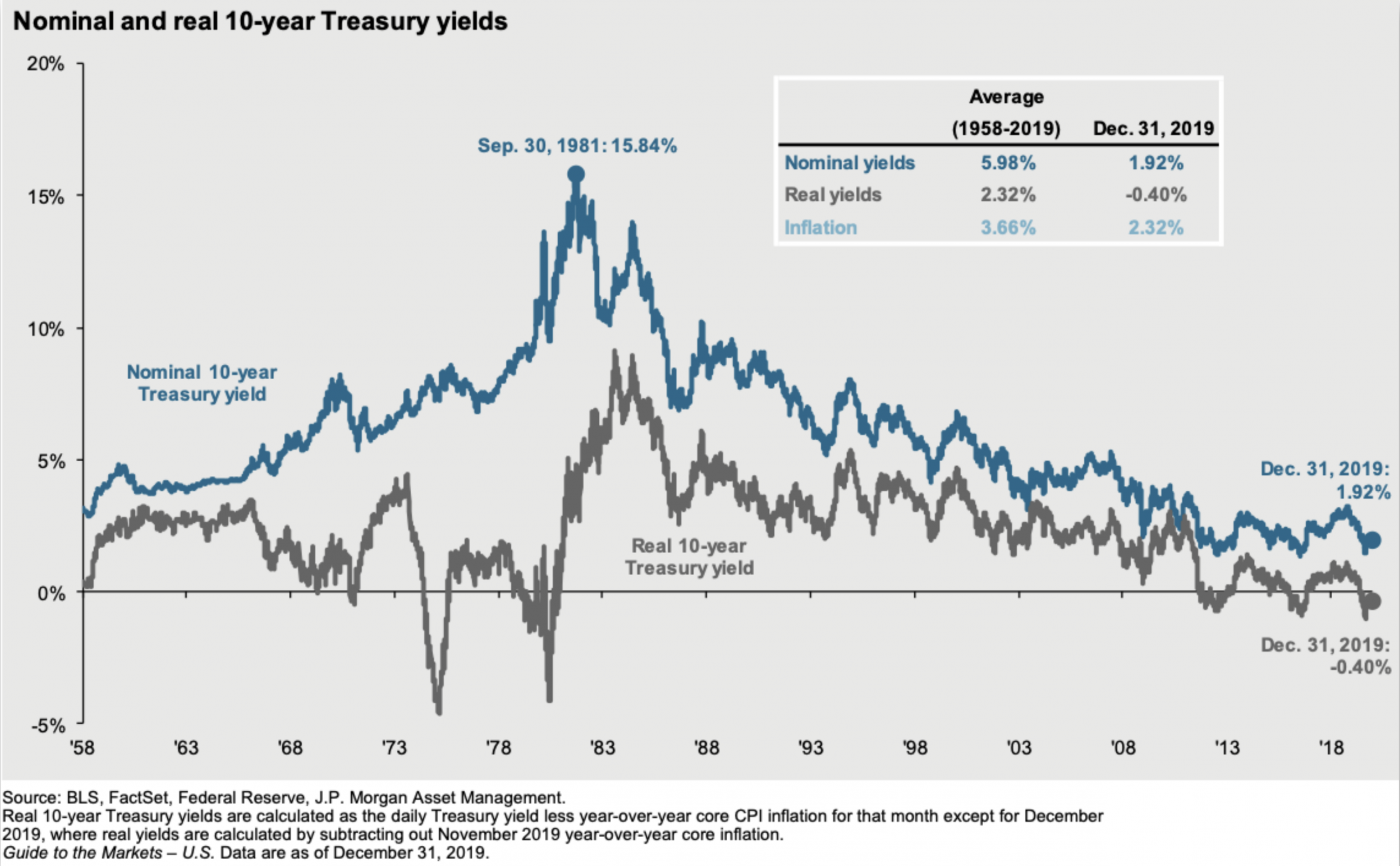 As we begin the new decade, there are some positives and negatives to consider. On the positive side, job growth has been solid, unemployment is at a 50 year low and wages for production and non- supervisory workers are rising. Inflation is muted and monetary policy is supportive of continued economic growth. Corporate earnings growth should be positive in 2020, with a low to mid single digit increase over 2019. The recent trade agreements with China, Mexico and Canada are supportive of global trade and economic growth.

On the other hand, geopolitical issues, political headlines and ongoing trade disputes may foment market volatility. The global economy is decelerating and will likely grow about 2% in 2020. Rising wages and low unemployment will pressure corporate margins. Last, market valuations for all asset classes are at or above their respective long term averages and will likely revert to the mean at some time in the future.

We are maintaining a slightly defensive posture with asset allocation, security selection, and portfolio diversification based on current market conditions, valuations, and expected returns. Our view is returns from most asset categories are likely to be modest during the next few years and investment portfolios will benefit from global diversification. We are committed to an objective goals oriented process and remain confident that diversified investment portfolios will compound long term.