Monumental events occurred in the first few months of 2022. Russia’s unprovoked war in Ukraine, persistently high U.S. inflation, and a shift in Federal Reserve policy to normalize interest rates are pushing and pulling capital markets globally. It will require time and patience for the markets to fully digest the impact of these events.

The conflict in Ukraine has overwhelmed headlines over the past few months so we think it makes sense to open with a few comments.

First and foremost, the humanitarian issues are enormous and distressing.

With respect to capital markets, Russia’s direct representation within the global equity opportunity set is small. At year-end 2021, Russia’s stock market represented 3.2% of emerging market and 0.3% of global equity benchmarks. With the Russian capital markets effectively closed to foreign investors, global asset managers have deemed their holdings in Russian assets are worthless and index providers have removed them from all of the composite benchmarks. Effectively, Russia no longer exists as an investable market.

Since the war began, unprecedented economic sanctions from the U.S. and our NATO allies are strangling the Russian economy. Russian citizens and businesses are experiencing hyperinflation and shortages of essential goods. According to The World Bank’s forecast, the monetary value of all finished goods and services (GDP) will fall 11.2% in 2022.

Despite being a relatively small component of the global stock market, Russia is a critical part of the global commodities market. Russia is a major producer and exporter of oil, natural gas and wheat. As noted in the chart below, all three have surged this year due to the war. Oil endured the largest swings during the quarter, with prices climbing to a 14-year high of $125 a barrel, up from $75 at year-end 2021. 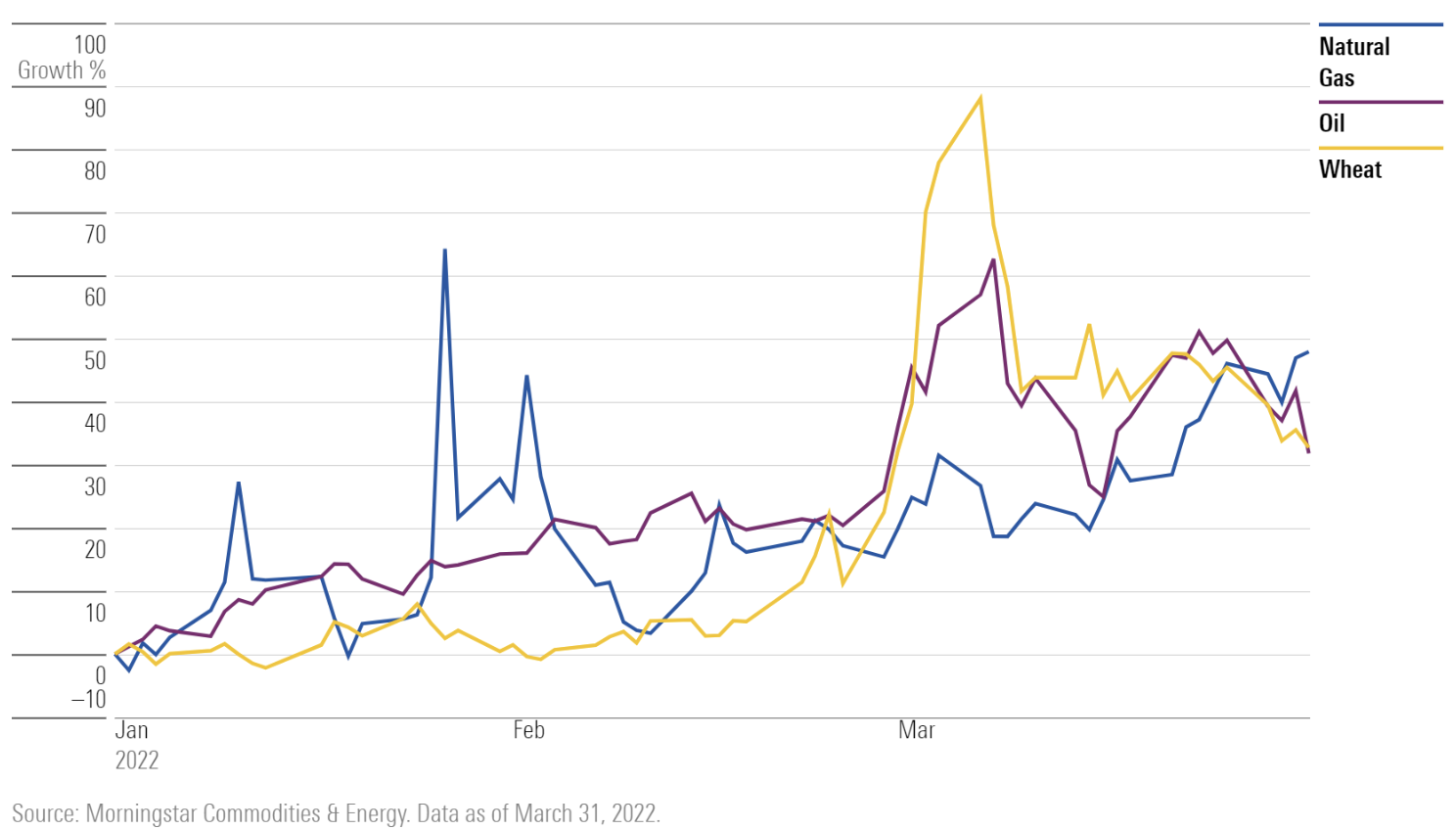 Europe is highly dependent on Russian oil, natural gas and coal exports. For the last twenty years, Europe has steadily reduced its domestic fossil fuel energy production, with a corresponding increase in its dependence on Russia. Russia supplies roughly one-third of Europe’s oil, 45% of its imported gas, and nearly half its coal.

Without any dependable alternative sources for energy needs in the near term, Europe must choose between enabling Russia’s war machine with continued energy imports, or suffer massive economic hardship by curtailing domestic energy consumption. Most of developed Europe has pledged to wean themselves from Russian energy dependence, but it will take many years to achieve these goals. In the mean time, Russia will continue to have considerable leverage over the region. Given these circumstances, lower valuations and a higher risk premium for investing in this region of the world may be appropriate. In other ex-U.S. developed parts of the world however, such as east Asia, Japan and Canada, the economic risks are less worrisome.

Over the past fifteen years, international equities have underperformed the U.S. by a cumulative 270%. However, markets are cyclical and there are periods where the opposite has occurred. International equities continue to trade at some of the cheapest levels relative to the U.S. in over 20 years. Market cycles often transition when you least expect it, and only time will tell when the pendulum has swung too far. Given where valuations stand today, the potential for reduced trade tensions and a lower dollar argue for continued diversification to international equities. For these reasons, we continue to be globally diversified in client portfolios. This has been a common theme in our quarterly letters, and was most recently discussed in our 4Q 2021 commentary. You can read more about the investment thesis here.

Volatility was above average in equity markets, and at the lows of the quarter in early March, the S&P 500 was down 13% from its record highs. Small cap stocks and the tech heavy NASDAQ 100 saw even higher volatility with bear market drawdowns of more than 20% during the quarter. Positive returns in March provided some reprieve, but markets ended in the red across most asset classes, with energy the most notable exception.

The dispersion between value and growth was wide in the quarter, with large cap growth underperforming value by 8%. A similar trend was seen across mid and small cap indices as noted in the table below. By design, most of our portfolios are intentionally skewed towards value within domestic equity, with Berkshire Hathaway the largest allocation. Berkshire ended the quarter in positive territory, up 18%, and was a portfolio ballast during the broad market drawdown.

Despite negative returns in the quarter, the S&P 500 return is 15.7% over the past twelve months and 18.9% per year on an annualized basis over the past three years. This is remarkable when you consider everything that’s happened during that time period. Lesson emphasized, never bet against the resiliency of U.S. capitalism.

Traditional fixed income securities are considered “safe” assets and market volatility is uncommon. Bonds often act as a buffer during stock market drawdowns, but not always. During the quarter, yields rose rapidly due to unanticipated projections by the Federal Reserve Open Market Committee (commonly known as the “Fed”) for a more aggressive monetary policy shift to combat inflation.

When bond yields rise, prices fall and performance suffers. Fixed income returns during the quarter, as measured by the Bloomberg US Aggregate Bond Index, were -5.9%. It was the worst quarter for the bond market since record-keeping began in 1973.

There have also been many headlines about the recent inversion of the U.S. Treasury yield curve.

The yield curve, as noted in the following chart, is a visual representation of U.S. Treasury yields for bonds at different maturities. A normal yield curve slopes upward, with investors demanding higher yields for longer-term bonds. When short-term yields are higher than longer-dated maturities, the yield curve is inverted. 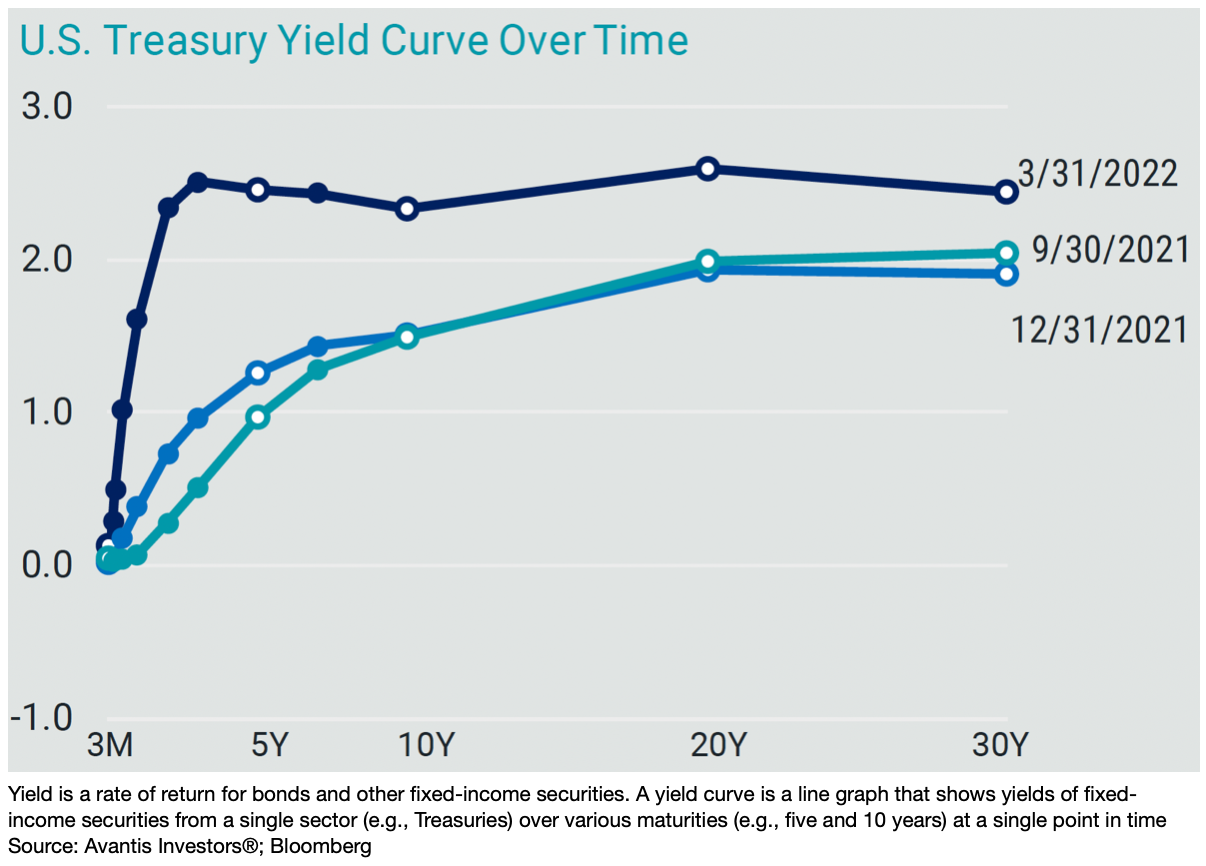 The 2- and 10-year treasury yields were 2.46% and 2.38% respectively as of March 31. The increase in two-year yields reflects projected increases in the Fed’s target interest rate, while the increase in ten year yields is an indication of long term economic growth expectations and the Fed’s decision to reduce its balance sheet. The Fed owns nearly $9 trillion of fixed income securities and is projected to reduce its holdings at a rate of $95 billion monthly.

As you can see, short term rates rose more than longer term rates during the quarter, creating a brief -0.08% inversion between 2- and 10-year yields at quarter-end.

So what does this mean?

Every recession has been predated by an inverted yield curve, but not all inversions have led to recessions. We can compare this to the square-rectangle phenomenon (as in a square is always a rectangle but a rectangle isn’t always a square).

Since 1987 the yield curve has inverted ten times, but the U.S. economy has suffered only four recessions in that same period. When a recession has occurred, the average lag-time from the yield curve inversion ranged from 6 to 22 months. Equity market performance leading up to and in the first year after the yield curve inverts has typically been positive, but weaker than average.

Economic growth is cyclical and there is no predictable time schedule for each phase of the economic cycle. Generally, every U.S. recession has led to a subsequent recovery, expansion, slowdown and eventually, another recession. In essence when the economy is growing, we are always preparing for the next recession. We are also hopeful that the economy continues to expand.

Instead of attempting to time the market, our goal is to build durable portfolios with the intent of investing for the long-term in all economic environments.

Ultimately, the yield curve may be signaling that over the next two years, there are both near-term strengths and risks to economic growth. Strengths such as a strong consumer and robust business spending could be offset by the risks of high sustained inflation and the potential for a Fed policy mistake.

Fed chairman Jay Powell himself cautioned last month that “Monetary policy is often said to be a blunt instrument, not capable of surgical precision. My colleagues and I will do our very best to succeed in this challenging task.” Our Q2 2021 letter provides great detail on how monetary policy can go wrong. You can read more about this here.

Fiscal stimulus colliding with supply chain issues caused headline inflation to rise by 8.5% year-over-year in March. This was the highest annual increase reported since December 1981.

Economics 101 will tell you that higher inflation eventually creates a drag on spending and investment for both consumers and businesses. Businesses typically pass most of these higher costs through to their customers, which may cause households to defer spending on products and services they may want but don’t need. This feedback loop creates a drag on corporate profits and economic growth.

On the other hand, U.S. consumers are in a strong position financially. Household net worth surged $19 trillion last year, the largest increase ever. Between stimulus payouts, a robust housing market and strong returns in the stock market, consumers have increased their savings and paid down debt.

That’s not to say that investors don’t have reasons to be concerned. Whether it is war in Europe, higher prices, the latest COVID variant, or partisan politics, there is a lot on investors’ minds. All of this is reflected in consumer sentiment, which is at its lowest level in over a decade.

The tendency to sell or reduce portfolio risk when you are concerned is natural, but as you can see in the chart above, it is usually not the best course of action. The University of Michigan Index of Consumer Sentiment over the past 50 years is shown with eight distinct peaks and troughs noted. It also shows how the S&P 500 performed in the 12 months following each peak or trough.

Efforts to time markets typically result in poor outcomes. Sentiment and markets may decline further, but when consumer sentiment is at its lowest, the market return has averaged 24.5% over the subsequent 12 months.

To be clear, we expect modest returns going forward due to the many reasons discussed in this letter. That said, we humbly acknowledge that the future is unknown, and certainly cannot be predicted in the short term. We believe success in investing starts with having respect for market dynamics such as current valuations or inherent risks. It further relies on the discipline of maintaining objectivity when others are greedy or fearful.

We are grateful for your trust and confidence. If you would like to review your financial plan or investment portfolio please do not hesitate to reach out to us. We welcome your questions and will be responsive.